While the table of the sensors needed is on the way, I started playing a bit with some of the electronics that I’m sure I’ll be using (6-axes gyro and accelerometer, pressure and arduino).

I began to develop an early prototype of the controller: I screwed the 6-axes sensor on a lego brick and built a small airplane model around it. 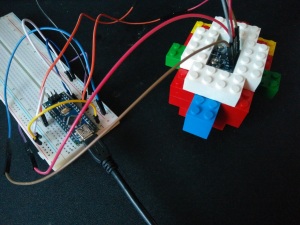 I wired it to an arduino nano and used some libraries and an interface made in processing to get and visualize the movements. For now I got only the input from the gyro, I am currently working on getting also data to from the accelerometer so that I can use it to maybe track the approximate position in space.

I got my hands on a small (really cheap) quadcopter. After training a bit in flying it, I took the controller apart trying to find a way to hack it and get to control the drone with other inputs.

This is a picture of the board inside the controller:

I was either thinking of trying to “intercept” the signal that is sent from the controller (thing that I would have no idea how to do) or to figure out the wiring and finding a way to bypass the two joystick potentiometers so that I could feed it my own data from an arduino. If you guys have any better ideas on how to hack the communication I’m really looking forward to hearing it! 😀

One thought on “Interactive Drone – Half prototype”